As some scholars argue, there is insufficient proof of the ‘neoliberal’ nature of the policies that outgoing Jakarta governor Basuki Tjahaja Purnama has led. What has happened instead is an increase of local state capitalism, marked by the roles of local government-owned enterprises in Jakarta’s development. Notwithstanding this fact, structural problems still are pressing in Jakarta, and are mostly related with land and spatial planning issues. Here I want to explore those structural problems in Jakarta that the governor-elect Anies Baswedan will deal with in office. One of pressing problem in the capital city remains unsolved: namely, chaotic spatial planning and its further consequences for the environment, including exacerbating flood disasters, and for vulnerable groups who need state the most—the poor.

Land, of course, is an important resource in Jakarta. With population growth of 3.7% annually, scarcity of land is a pressing issue. UN-Habitat estimates that in 2050, population living in the cities in the world will be 66%. According to BPS data n 2012, 54% of Indonesian population live in the cities. There is no hard data on land prices in Jakarta, but it is plan to see that it has spiralled annually, and become unaffordable for the poor.  The number of poor in Jakarta—that is, living below the official poverty line—is 3.5% of total population, or 320,000, similar to the population of Canberra. Scarcity of land and its constant increased price make it hard to access housing in Jakarta for the middle class, let alone the lower class.

Within this context, small groups dominate and control land. Many of the top 40 richest men in Indonesia (according to the business magazine Globe Asia) are in the property businesses. (It’s important to note that the Indonesian rich is limited not only to Chinese Indonesians, but also includes many indigenous (pribumi) tycoons.) These private developers provide housing for the middle class and upper classes in Jakarta. In the late 1980s, housing estates were largely located in fringe of Jakarta. Ciputra, the so-called ‘king of developers’, developed a satellite city of Bumi Serpong Damai (BSD) in Southwest Jakarta as well as Pantai Indah Kapuk in North Jakarta. Lippo Group, belonging to the Riady family, constructed Lippo Karawaci in Tangerang, and Lippo Cikarang in Bekasi, East Jakarta. Ciputra actively lobbied Soeharto to convert the peatland in North Jakarta into a residential area before the Salim Group, belonging to the notorious New Order crony Liem Sioe Long, took over the project. These are the examples mentioned in Arai’s research in 2015. All of developers found their close connections to Soeharto to be instrumental in building vast land holdings, according to Winarso and Firman’s research.

But as traffic jams worsened, and Jakartans who lived in these suburbs spent more and more time on the road commuting, the business of high-rise apartment buildings in the city centre started to take off in the early 2000s. Agung Podomoro Land (APL) owned by Trihatma Kusuma Haliman was as one of the pioneers in this area. Other developers followed in APL’s footsteps and moved their focus back into town to build high-rise apartments there. Summarecon group constructed much of Kelapa Gading. The prominent politician-cum-businessman Aburizal Bakrie had Rasuna Episentrum in Kuningan area. The Lippo Group developed high rise mixed use complexes for the upper middle class in Kemang and West Jakarta. The Murdaya family, taking over the property business of the Salim group, now has its own property projects in Jakarta’s CBD.

The Jakartans who can afford to purchase or rent their own apartments are perhaps part of the lucky 18% of those in the middle class population celebrated by such entities as McKinsey. At the other side, the social class that manages to pay rent for rusunawa is those with provincial minimum wage is IDR 3.35 million/month, or less. Here we see stark extremes of housing pricing among social classes, which also reflects the tremendous inequality between social classes in the capital.

According to market directory of apartments in Jakarta, there are 334 apartment developments, and 116 under construction. Data from Colliers states that total supply of in 2012 was almost 150,000 units. The figure may increase around 20% of that number in 2017. If we compare these numbers with rusunawa in Jakarta, the difference is stark. According to the provincial government’s data, the total number of rusunawa public housing developments in Jakarta is 24, representing fewer than 10% of all apartments. In 2016, the Jakarta government planned to build 21,000 units with budget allocation Rp3.3 trillion (A$330 million). Again, we see more inequality, this time in terms of housing provision: the rich and middle class have more housing supply, while the poor have to struggle to access limited quantities of affordable housing.

If during Soeharto the era it was the central government who had control on spatial planning, in the post-Soeharto era it is local government through their local bylaws or perda.. These set guidelines for urban development in spatial planning (RTRW) documents with a time frame of 20 years, with possible revision every 5 years. In more detailed accompanying spatial plans, provisions for zoning—residential, commercial, or green space.

There has been violation of these planning regulations, especially conducted by the developers I introduced above—and the Jakarta provincial government seems to approve of it. Kemang in South Jakarta is one good example. According to the Jakarta RTRW document, it was a conservation area. In early 1980s, 70% of the area was green. But the areas was rezoned for commercial use, with cafes and shopping areas proliferating in the 1990s. Due to this conversion, green areas intended to be a catchment area have deteriorated. As a result, water has inundated the suburb every rainy season since the mid-2000s. There has been little concrete action that taken by the government in response.

Another prominent source of spatial law violations is the case shopping mall construction. According to data collected by Deden Rukmana in 2015, there are five main areas where the designated uses in Jakarta’s 1985–2005 were violated, as can be seen in table below.

While the Jakarta government relaxed its regulation towards developers, they are very hard on violations of spatial planning by poor communities. Between 2015–2016, according to Jakarta’s Yayasan LBH (Legal Aid Foundation), there have been more than 300 cases of forced eviction in Jakarta, with more than 14,000 victims, making it the largest forced evictions in Jakarta’s modern history.

This inconsistency brings severe effects for the whole city.  Construction of high rise buildings in the capital has resulted in the increased rate of land subsidence, which the World Bank estimates has been occurring at the rate of 4-6 cm per year. These high rise buildings extract water from the ground, which deteriorates the soil, leading to subsidence. At the same time, green area remains less than 7% of Jakarta’s surface. These all have worsen floods every year in Jakarta, and has made the capital achieve the title of a ‘sinking city’. The whole city and its population bear the cost.

Jakarta’s election in 2017 has absorbed us all with the prominence of issues of religion and identity, which are indeed quite worrying for the future of Indonesian democracy.  However, looking towards Jakarta’s future, persistent urban issues such as land, environment, and spatial planning, which has both reflected and reproduced spatial inequality among social classes, remains. This issue are material for all of Jakartans in the next five years, no matter their religion or race. 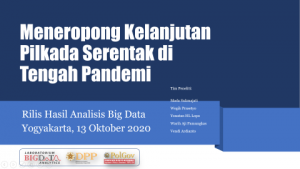 The Continuation of Simultaneous Elections in the Midst of a Pandemic